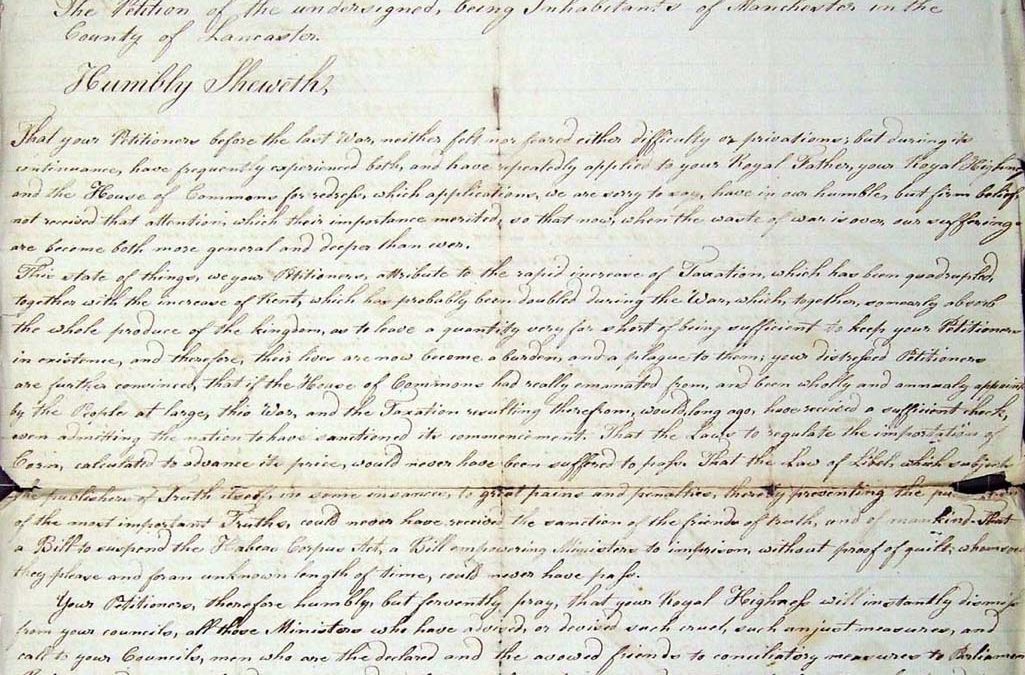 Lord Liverpool led the government in 1815 following the Napoleonic Wars between 1803 and 1815. Great pressure was put on the for social, economic and political reform.  However, the government introduced in 1815 The Corn Laws to protect British agricultural landowners from cheap foreign imports. The effect was to increase grain prices and decrease supplies. The laws, designed to protect landowners, caused serious hardship to the poor.  Low grain harvests in 1817 did not help. Famine ensued.

The Reform Bill was blocked on procedural grounds. Dissidents rebelled and began to take civil action to draw attention to their plight.

The Gag Acts were introduced and the Habeas Corpus Act was suspended leading to imprisonment of radicals without trial.

Radicals organised meeting to plan action and therefore decided to appeal directly to the Crown. They prepared a petition that was to be presented to the Prince Regent.

On 10 March 1817 around 5000 marchers, comprising mainly spinners and weavers, gathered near Manchester along with a large crowd of onlookers. Around 25000 people gathered.  Each marcher carried a rolled blanket or a large overcoat to sleep under at night as a sign that the man was a textile worker.

The march to London failed since it was broken up by the King’s Dragoon Guards, many were arrested and the march ended in confusion but it did not end before the men were attacked in Ardwick on the outskirts of Manchester.

The Blanketters’ March led to the formation of the Manchester and Salford Yeomanry to combat future insurrection. It became infamous later for its role in the Peterloo Massacre.

What were your ancestor doing at this time? Would these events have impinged on their lives?